Backing up 10-15TB of data every weekend using IBM O/S commands to LTO tapes was extremely time-consuming for the IT department at Fidelity National Information Services (FIS).

The overly-involved manual requirements of using tape no longer met their operational needs. According to Dave Sicotte, Service Delivery Analyst Specialist at FIS, they wanted a better solution that offered encryption in order to eliminate the potential security issues that existed because physical tapes could be lost or stolen.

After researching a number of systems, FIS selected LaserVault Backup (LVB) from Electronic Storage Corporation. LVB is a tapeless disk-to disk backup system for iSeries, AS/400, and System i users.

LVB provided FIS the ability to replace tape without disrupting their operations. Using a TCP/IP connection, and with commands like SAVLIBLV, SAVOBJLV, SAVDLOLV, that are similar to the IBM commands they currently used, the transition to using LVB was an easy one for FIS.

Using LaserVault Backup, in conjunction with DataDomain for replication, FIS has instituted a secure backup solution to protect their iSeries data. Dave states,

“I like being able to restore one LPAR’s data to another LPAR when needed; no tapes needed, especially during weeks that include a holiday and not having to hold the backup because no tapes are loaded.

“If you are looking for an alternative to tape and the need for encryption is important, I would recommend LaserVault Backup.” 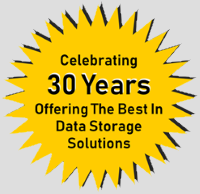 See our solutions on the IBM Global Solutions Directory:

Thanks to everyone for attending.